Movies Come in Pairs: The legacies of Disney & Jobs

In theatres and streaming online today is a pair of engrossing documentaries about two of the best salesmen known to man, Walt Disney and Steve Jobs.

These two men were owners of the zeitgeist in their respective times, capturing the imagination of and inspiring a generation. They exist with near mythical status and those who idolize them tend to ignore certain key aspects that don’t suit their narrative. Namely, that despite their raw talent and drive they were human and had many faults.

We’re introduced, in two parts, to the man behind the mouse. A man whose endless optimism and work ethic propelled him from a simple midwest existence to the head of the biggest studio in Hollywood. From meager beginnings and false starts in Missouri, Walt Disney comes to California and strikes gold when he beats the competition with synchronous sound and animation, not to mention the introduction of the ever-endearing Mickey Mouse. However, that wasn’t enough for Walt. He wasn’t content to be making his beans. He saw the possibility for animation to be more than cartoon and fantasy, to live beyond our dreams. With grit and stone he gave us Snow White, Fantasia, and Disneyland. At times breaking the bank and his resolve in order to do so. Again, the train doesn’t stop there. Had it not been for an untimely death who knows what his next move would have been. 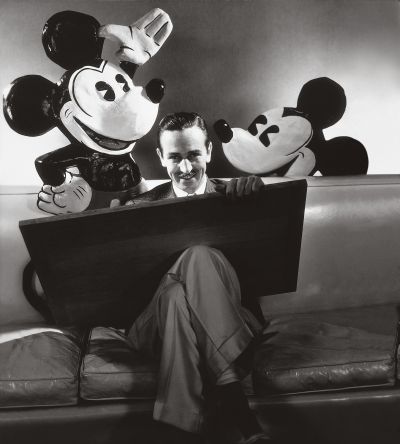 ca. October 1933, USA — Walt Disney seated with drawing board on his lap and representations of his creations Mickey and Minnie Mouse behind. — Image by © Condé Nast Archive/Corbis

The four hour film, comprised mostly of archival footage and talking heads, breaks down the character Disney created of himself to try and also bring out the ruthless iconoclast and narrow-visioned man who could bring us Bambi while battling an animator’s strike and refusing to pay due wages. Like Jobs, Disney was both an innovator and a member of the old boys club. He put names on the infamous Blacklist out of spite for unions and created a narrative that the communists were out to destroy him. When the going got too real (like the backlash to Song of the South), he retreated and hid behind a notion that he was trying to create an ideal world. The film delves into Disney’s contradictions, his obsessions, and his undoubted succeesses. It may be grueling to watch all four hours but broken down into two episodes, it’s truly a must watch. Explorations such as this place men like Jobs and Disney into the context of the American entrepreneurial spirit. These men understood the American psyche and were able to anticipate our needs before they existed. Walt Disney’s legacy is still very much in play today as an exporter of an American fantasyland to the world. Few elicit such powerful emotion by the mention of their name alone.

PBS, at times viewed as the distributor for an aging generation and Downton Abbey, has made significant strides towards reinvention and offers up a diverse alternative to the algorithmically repetitious streams on Netflix/Amazon/Hulu. I don’t know about you but my algorithm seems to be losing serious steam after eight years on the service. The recommendations are getting to be an amalgam of B-movies and straight to video. Have I really watched the best they have to offer? Most refreshingly, the PBS content is free!

(For now at least, rumor has it that a pay wall is in the works…)

Do yourself a favor and scroll down on that Apple TV/Amazon Fire Stick/Roku and check out the PBS app. There’s much more than Downton Abbey to be seen.

Turning away from the world of fairy tale and ideal worlds, we jump into the realm of endless possibility and rapid disruption to the status quo with Steve Jobs: The Man in the Machine.

It may be hard to take a look at the men we hold on a pedestal but as we find in this documentary, we as adults are complicit in the actions of those who deliver our dearest products to us. We validate their actions and confirm their sense of self. Mickey Mouse, the iPhone; these products reflect the values and ideals of their creators. We buy into their world view.

One of the most poignant reminders the documentary makes is that Jobs had the focus of a zen master but lacked the empathy. The danger that some critics and idolizers face is the idea that Jobs was somehow imbued with a divine sense of responsibility for society. However, Jobs was simply a visionary businessman in the same vein of those who came before him. The responsibility, as Gibney reminds us, lies with the consumer. 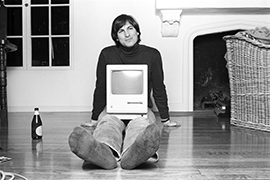 Oscar-winning director Alex Gibney, fresh after taking on religious institutions such as the Catholic church (Mea Maxima Culpa) and Scientology ( (Going Clear: Scientology and the Prison of Belief), once again proves himself unafraid to delve under the surface of charismatic celebrity and the institutions that elevate them. However, unlike his portrait of Lance Armstrong (in which Gibney gets caught up in the deceit), he seems to have his guard up around the story of Apple founder Steve Jobs and his legacy. It does his subject justice, as the film isn’t wrapped around Jobs’ finger. With just enough distance to look at Jobs the man and not the product, Gibney succeeds in bringing a nuanced portrait of a modern day Disney to the screen.

“Mankind are so much the same, in all times and places, that history informs us of nothing new or strange in this particular. Its chief use is only to discover the constant and universal principles of human nature.”

No matter the time in which they lived, both Jobs and Disney are idolized as more ethos than human. Few men have touched as many bases and done as many things, but at what price?

Great cinema stimulates thought and conversation. Take a look at the above and I’m sure you’ll have plenty to go on.