Please excuse my long absence as my film world went into full blown festival prep and travel mode up until just recently.

Now that I’m back in the Bay Area, I’m happy to get back to this blog and to detail some of my Italian cinematic travels.

Starting today with the big daddy of cinema in Italy…

Welcome to Cinecittà, the city of cinema!

For those of you that don’t know, Cinecittà isn’t just a great little pizzeria off Columbus Ave in North Beach (try the Polpettone a la Mamma Anna pizza my friends), it is also the most renowned film studio in all or Europe. Cinecittà counts for the largest film studio in Europe, spreading over an area of 40 hectares with 22 stages, 2 permanent tents, 300 dressing rooms and offices, 21 makeup areas and a 7,000 square meters outdoor tank. Still standing in most of it’s glory (they were renovating while I was there), Cinecittà is a holy land for cinephiles. 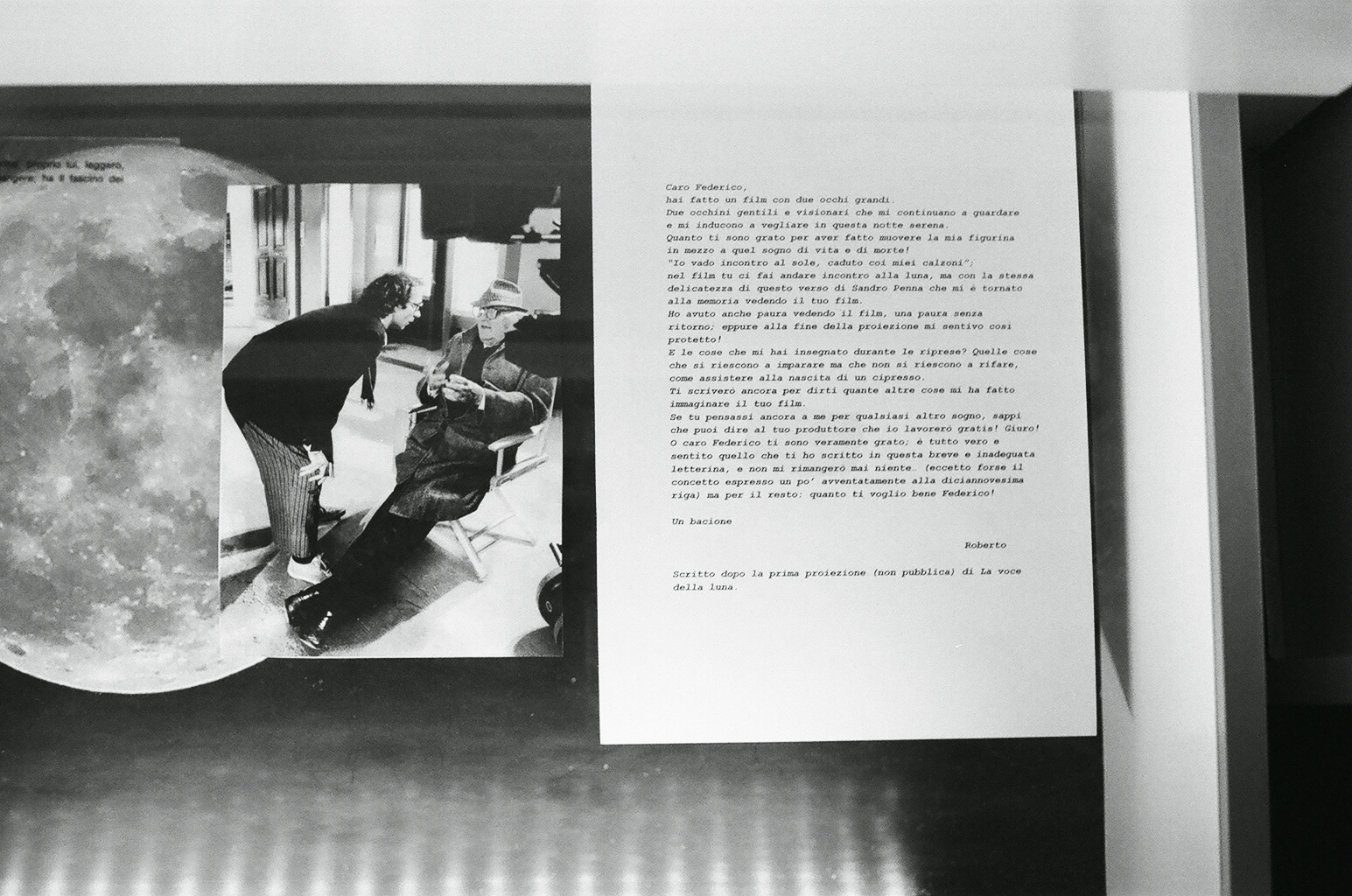 On one of the last days of the my Italian excursion I found myself in Rome where I eschewed the crowded lines at the Vatican and the bus to the aqueducts to hop the metro to Cinecittà. To the hallowed ground of Fellini, Rossellini, the Taylor/Burton affair, Benigni, and Scorsese.

An entire hall is dedicated to the Federico Fellini (not to mention Teatro 5), who chose Cinecittà as the place where his vivid imagination, and dreams as he constantly slept there, would take shape. The exhibit is rich with texts from Fellini’s productions and rooms filled with unreleased footage, drawings, costume designs, and images.

What you see above is a photo of my favorite exhibit piece where a faux filing system is filled with special items particular to a few cinematic icons. Within one of the drawers dedicated to Fellini was a fan letter from Roberto Benigni, thanking him, in short, for setting the example for he and others to follow. It’s a humble letter and struck a chord with me. It felt like a letter Woody Allen would have sent to Ingmar Bergman. Pure admiration. 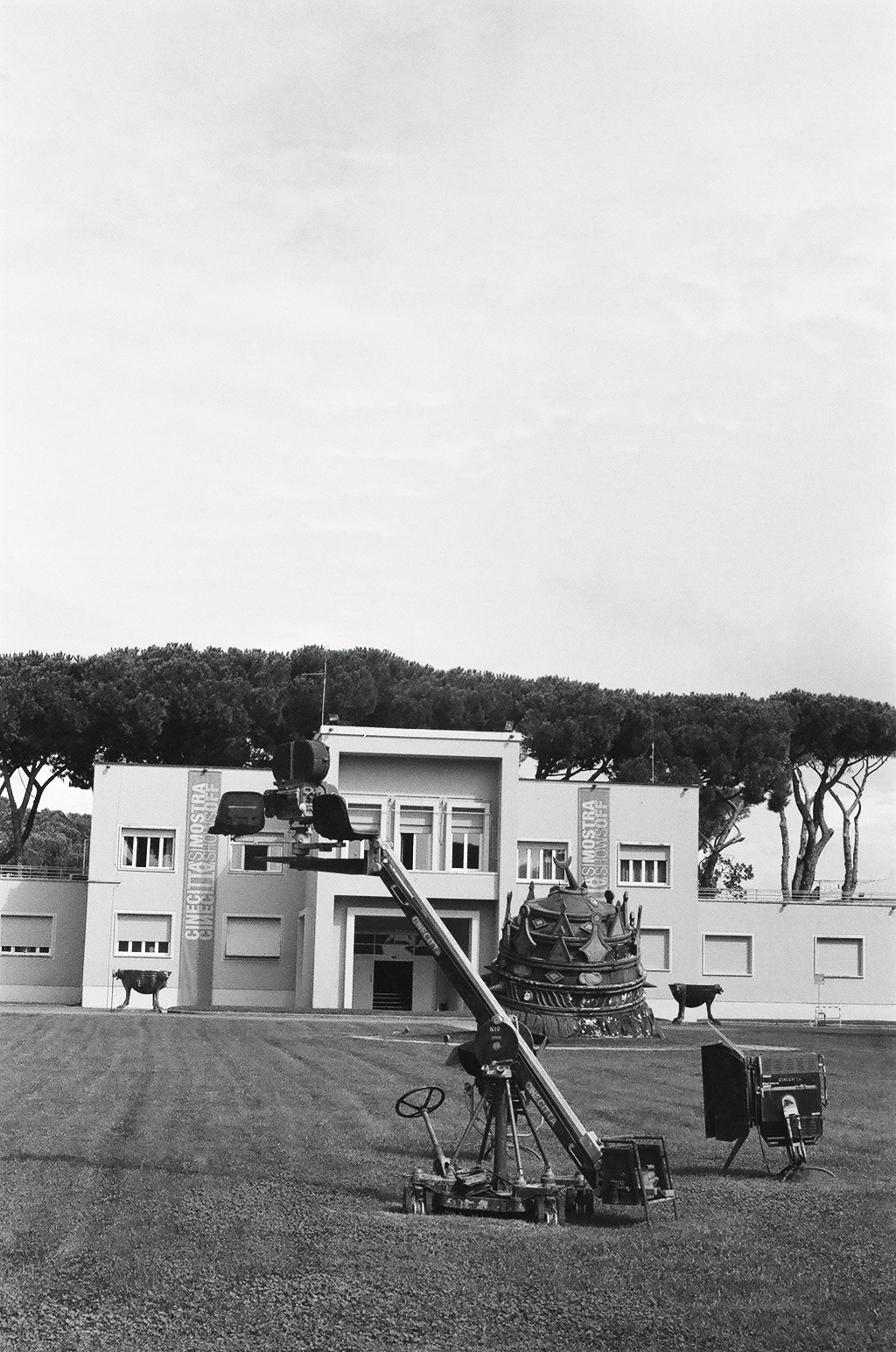 Explained in the “Perche Cinecittà?” section of the exhibit the history of the studio is vividly told through newsreel footage spanning from the first days of cinema until now thanks to the expansive work of Istituto Luce, Italy’s preeminent cinematographic archive.

Cinecittà was built by Benito Mussolini in 1937 for the purpose of creating propaganda films as he, like many other leaders at the time, recognized the immense power of cinema in shaping the minds of the masses behind their causes. This explains the fascist architecture of the entire studio with it’s simple geometric shapes and military design.

So excited I was to see the Rome and Gangs of New York facades, that it took a half hour longer than necessary to realize the studio was actually in disarray.

Led astray by a slew of advertisements lining the buses in Rome, I’d thought that Cinecittà was undergoing a revival. I thought this “Cinecittà World” was an appendage to the studio like the Universal lot tours in southern California. Unfortunately this “Cinecittà World” is actually much like Universal Studios the theme park with roller coaster rides and overpriced churros. More research is needed but what I saw was money filtering into to a mouse trap at the expense of up-keeping the studio it was built to romanticize.

Cinecittà was a ghost town. I was there on a Thursday in the midst of business hours and the body count was such that I could count them on my fingers and toes. Production design may have been underway for a Lifetime- esque Jesus epic, but there seemed to be no life to this once glorious studio. Our kind tour guide informed us that we could rent a portion of the Rome set out for weddings and special events (see below). 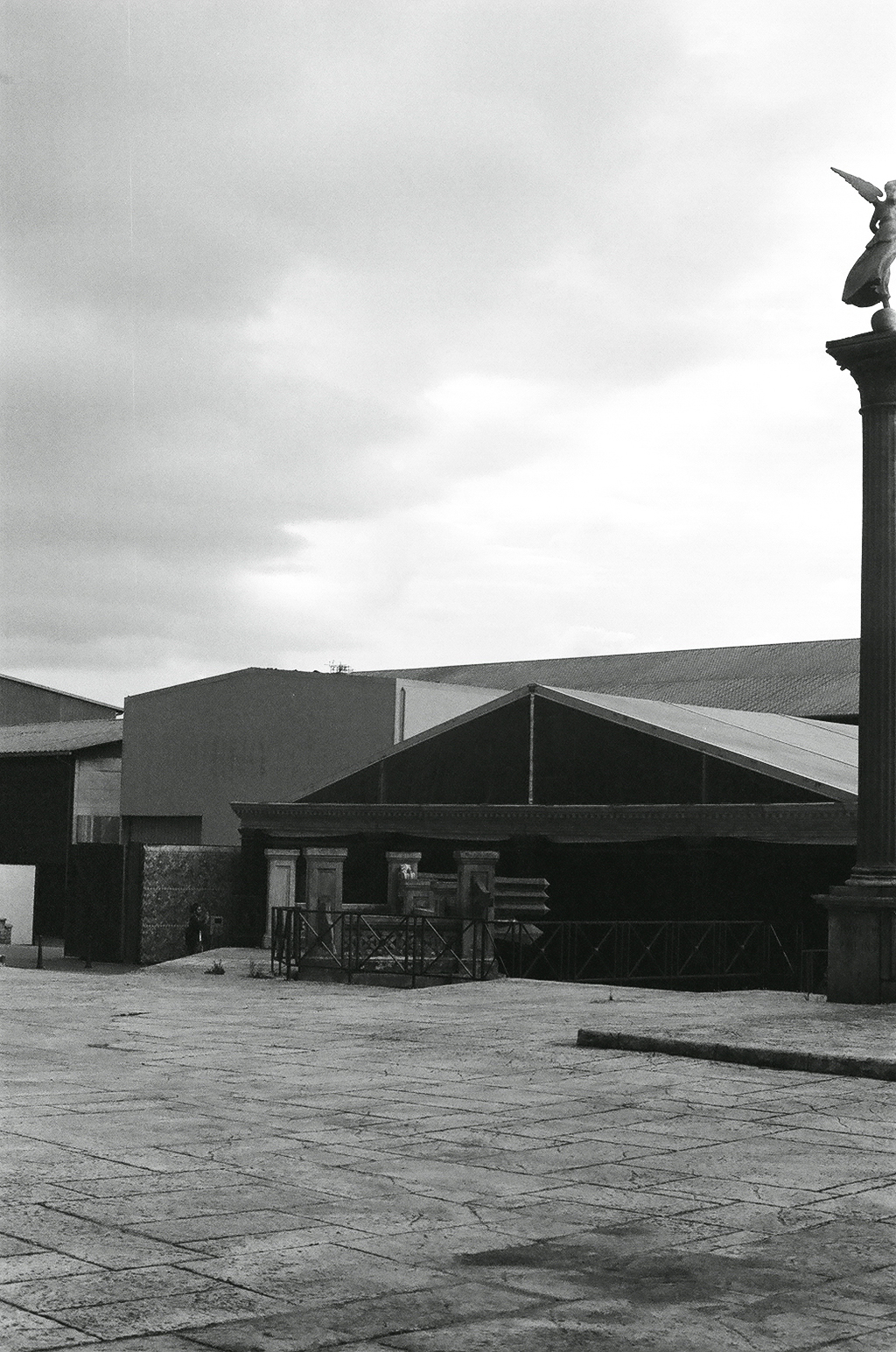 Not all is lost however. Cinecittà experienced a similar crisis during WWII. At the tail end of the war, and shortly after the Germans left Rome, much of the city lay in ruins. Many of the filmmaking facilities were destroyed, including much of Cinecittà. The studio was forced to transition into a refugee camp. Cinecittà didn’t fully recuperate it’s space and grandeur until the 50’s when Fellini and big Hollywood money came onto the scene (i.e. to build ROME in all it’s polystyrene glory featured below). 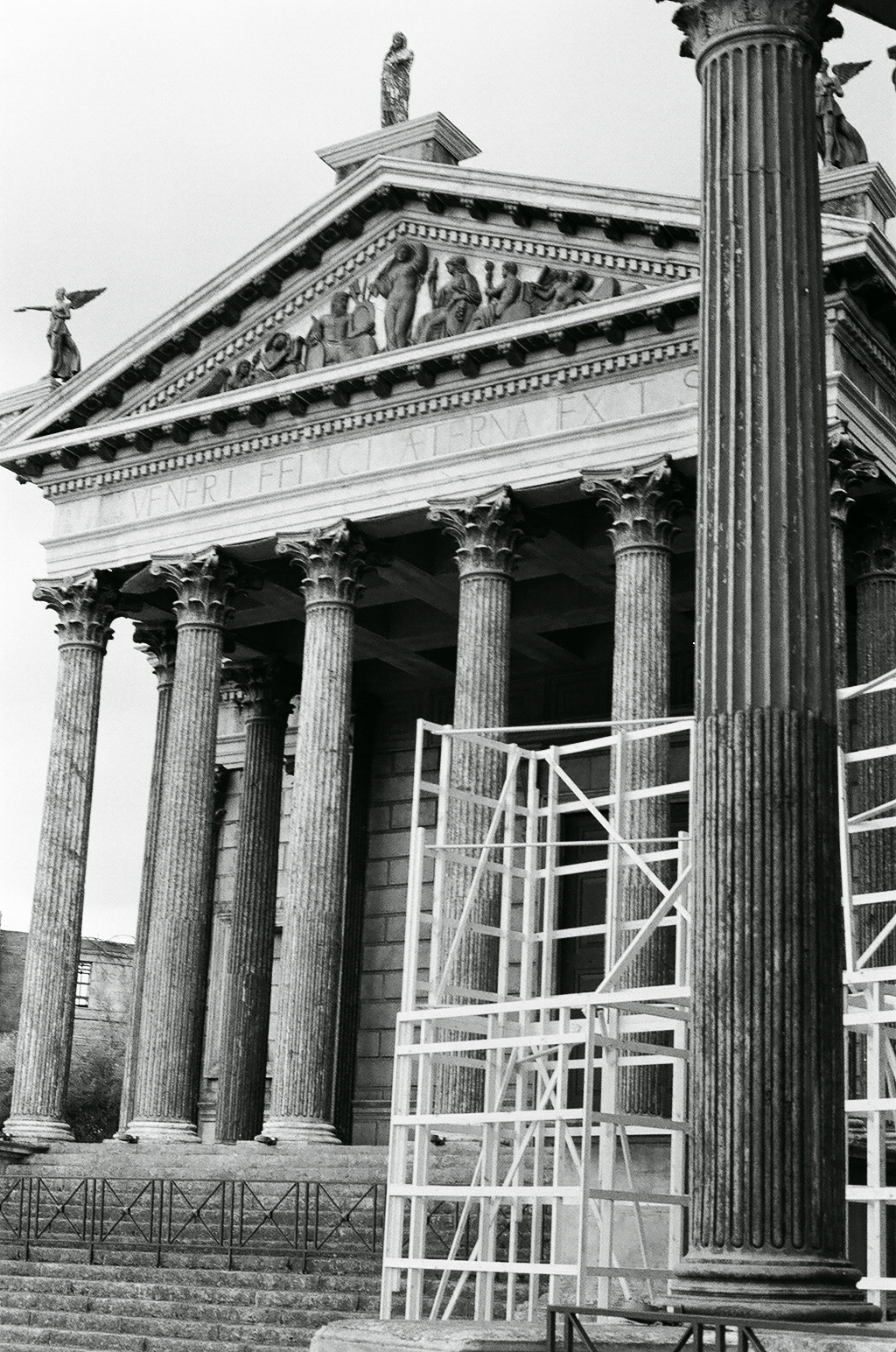 During this out of sorts time filmmakers had to be ingenious with production. One example is Rome Open City, which was forced into the streets for location shooting and ushered in a new era of Italian filmmaking. Had Rossellini and his peers been able to retreat to the sound stages of Cinecittà neorealism might never have gained traction. 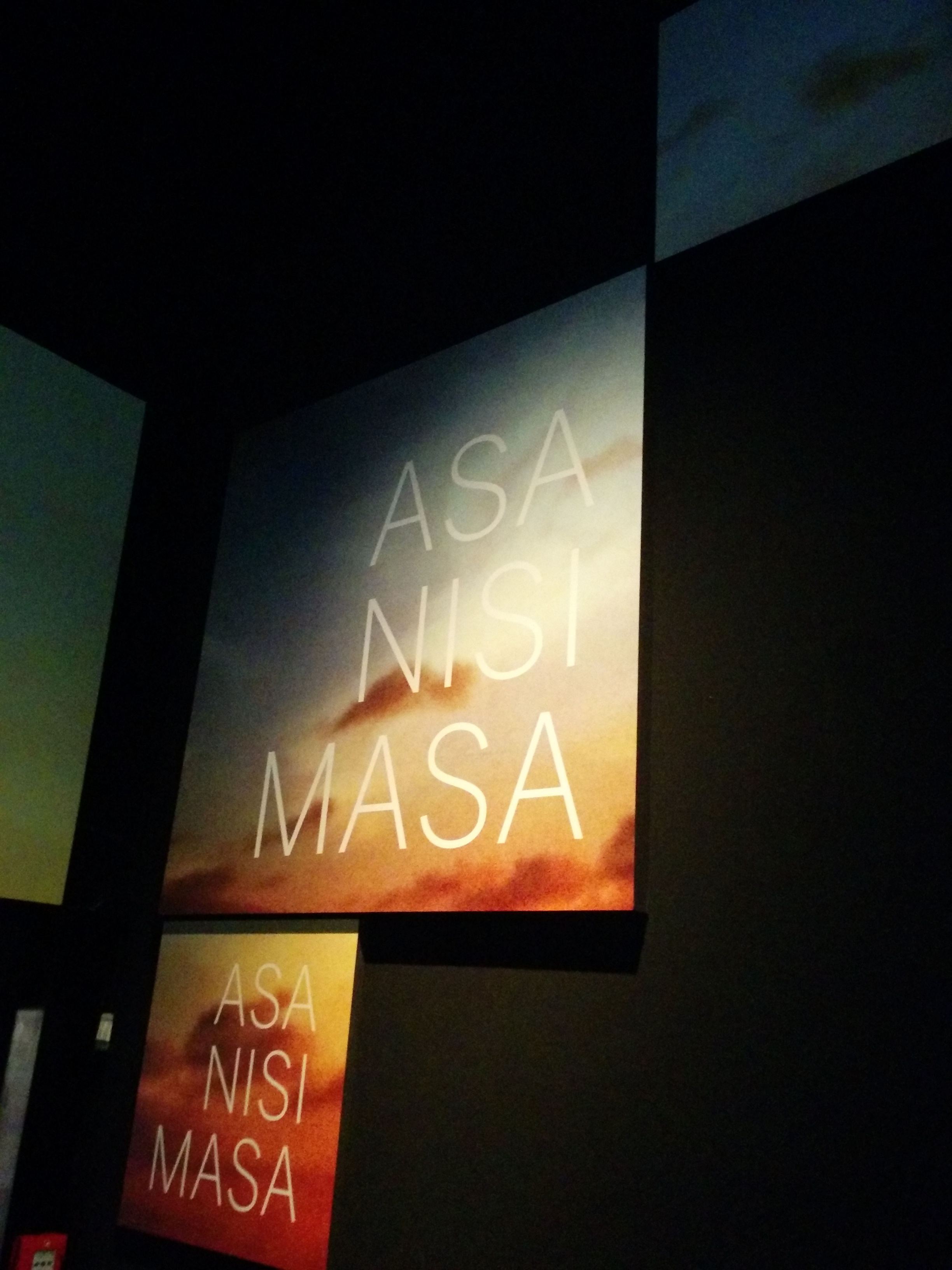 Now, I’m back in the Bay Area and I am just LOVING how SF Film Society has chosen the Vogue Theatre as the new venue for it’s Fall Season screenings.

One film I’ve had the pleasure of screening a bit ahead of time is Blame Freud by director Paolo Genovese.

A light hearted romantic comedy much to the tune of Tortilla Soup, Blame Freud is a story about a middle-aged therapist as romantically clueless as his three adult daughters. Despite his best advice, Francesco and his daughters meddle in each other’s love lives causing some comedic, albeit formulaic, set ups. It’s more a guilty pleasure watch than anything. There truly isn’t too much to say about this film other than, if you like romantic comedies and find yourself quite sick of watching Clueless or on repeat you’ll like this film.

Of course, more to come as we get closer to the event…

The one film I can’t wait to see myself: