Sundays are for Revivals: Shepitko and an argument for a Thinking-Woman's Screening in San Francisco

I remember the day like it was yesterday. I was new to San Francisco and taking one of my first solo trips to the local movie houses the city had to offer. On this cold, foggy day (remember those?) I was headed to the Lumiere off Polk Street but as usual I got there beyond early so wasn’t allowed in. For what film, I couldn’t tell you. Something tells me it was The White Ribbon but I can’t be sure. Something about Polk Street was intimidating to me at the time.

It was all an unknown and my small town sensibilities didn’t really understand the reason for the variety of smells coming from all sides. The bars were dark and I felt like I was in Gotham. I walked cautiously up Polk Street to distract myself briefly, holding my purse close to my chest as though there was anything in there other than my inhaler that I’d miss dearly if taken. Luckily, a welcoming sight was in close proximity. Gramophone Video was a perfect shelter. I went in and felt immediately safer. I was among friends now. At that time there were organized sections by classic screen stars like Elizabeth Taylor and Greta Garbo. However, what really caught my eye was a sparse rack near the front with a few odd dvds for purchase. Amongst the 80’s B Movie titles I saw it. A white and green dvd case with a newly familiar name on it. Larisa Shepitko, an icon of sixties and seventies Soviet cinema, was the director and Wings (1966) was the film. I’d seen The Ascent in class and was going through a phase of obsession with the legacy of Soviet politics in Eastern Europe. It felt like a diamond in the rough find. Without hesitation I grabbed this, and of course a rental of Butterfield 8, off the shelf and high tailed it back to the Lumiere Theater (not aware that I’d be witness to it’s last days as well). My tolerance for media consumption is high so of course I got home later that night and immediately watched Wings, the story of Nadezhda, a celebrated Stalinist fighter pilot, now principal of a vocational college, who finds herself alienated from her daughter and at a loss for her sense of self.

Available on Hulu HERE for those that don’t have the pocketbook for Criterion Gold!

Wings is a transcendent film about the Soviet experience. Having followed the manual Nadezhda is still at odds with the life she dreamed she’d live. Her sense of duty so strong she refuses to indulge in her desires yet most alive when daydreaming of her days in the war, as she soared above in a fighter plane. Nadezhda meanders through her day lost in a haze of self reflection. She looks at a photo of her younger self in a museum and isn’t sure whether she really made it through. She wanders from grand city spaces to cramped Stalinist housing and seems lost in both. At times mechanically contained and at others aimless and small. She is Jeanne Dielman’s soul sister; calm on the surface, boiling on the inside, and nearing a magnificent meltdown. Every encounter, a reminder of her past greatness and the stagnation of the present. The film is a slow burn and a feminist classic lost amongst the remainder of Shepitko’s male-centric portfolio. Check it out if you can, it’s a film that follows you for years. 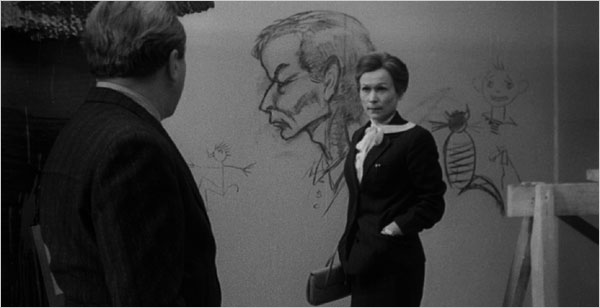 The film aroused considerable Soviet press controversy at the time, as films were not meant to depict conflicts between children and parents but taken with it’s contemporaries such as Ilych’s Gate (1965) (also known as I am Twenty), it dealt with a common theme. That the society one generation fought for was at odds with the values of the Thaw youth. Seen through the eyes of their children, Nadezhda and others are pawns to the ideology. Self-censored and their legacy devalued. Of course, the exploration of these themes were not tolerated for long as Brezhnev was on his way with a new set of cinematic standards for Soviet filmmakers.

Larisa Shepitko is an important figure because her work was at the forefront of the Russian “New Wave” that lived under Khrushchev before the cultural clampdown of 1967-8. We think of the Soviet tradition as the boys club, yet Shepitko stood amongst a band of inventive filmmakers who took advantage of the brief lessening of censorship to make soulful, challenging films that defied the Soviet charter. Had she not died a young death who knows the breadth of work we would have seen from such a talent.

Shepitko’s better-known work, The Ascent (1976), is a tense tale of two starving partisans crawling across the hostile snows of Belarus during the 1942 Nazi occupation. Much more in line with the Soviet realist aesthetic, The Ascent is harrowing and a masterpiece. However, Wings is my preferred Shepitko film as it touches me deeply as a woman. Many feel that Shepitko avoided the female psyche for the most part in her films, and discard her from feminist film theory. However, I think this is a disservice to her legacy. I see in Maya Bulgakova’s performance, the strain of every woman as she reaches a certain age. I see the sacrifices and struggles of my mother and grandmothers. The dignity of achievement and experience and the glazed eye of remembrance. It was Shepitko’s first feature and to me it feels as her most honest.

Which leads me to a current frustration. A frustration with the “female-driven” screenings happening around the country today. I understand the need for popular cinema and butts in seats. Truly, as someone whose filled out many box office reports, I understand the desire to screen Clueless and Mean Girls. However, I’d love to see the independent cinemas of San Francisco bring women-directed masterpieces to the fore. For all the reserved revival slots this city has to offer it is tragic that the death of Chantal Akerman is one of the only triggers to get Jeanne Dielman on our big screens (I only concede that the length is a challenge but today we’re getting a dosage of The Godfather so I’m putting the kibosh on that). The work of great women filmmakers and writers shouldn’t be marginalized to an honorarium screening. Dear Castro Theatre, give us an Agnieszka Holland, Sally Potter, or Laura Poitras day! Give us a thinking-woman’s day of cinematic celebration!

Side note: Jeanne Dielman 23 quai du Commerce, 1080 Bruxelles will be playing at the Castro Theatre on November 15th. I in no way want to diminish the honoring of Akerman’s passage because this essential cinema doesn’t grow old with repeated viewings.

I feel ever-indebted to the experience of watching Wings and the work of Larisa Shepitko. If I hadn’t, who knows if I would have passed the knowledge test to get my first job in the business. That was how I knew I was in the right place. That upon being asked my list of top films I offered Wings and was introduced to the following short documentary made by her husband Elem Klimov, Larisa (1980). An ode to a great woman, a great filmmaker, an imitable talent. I hope if you don’t know her already that you will join me in consuming the works of Larisa Shepitko. You will not be disappointed.

Elem Kilmov's Larisa from The Eclipse Viewer on Vimeo.